I’ve dedicated the past year to reading only books that I believed would inspire and motivate me to be the best version of myself. A few of these books pushed me to take a chance on my dreams and enroll in a Winemaking Certificate Program. Some of the other books have motivated me to run harder and faster and embrace my body as an aging athlete. I even set a goal to qualify for Boston this year! I have learned I have the potential for so much more from this past year’s reading list. If you are stuck at home and in need of motivation check out my list below!

END_OF_DOCUMENT_TOKEN_TO_BE_REPLACED

Our family has spent the last four weeks on the beautiful island of O’ahu. I wish I could tell you it was for a much needed vacation and family time (in a lot of ways it was), but in reality it was because we had to be medically evacuated to the hospital here. I could write several blog posts about the inadequacy of the current healthcare provided to military families stationed overseas, but I’d rather focus on the amazing treatment I finally received and the amazing ohana I found on the island.

As Claire mentioned in her last post, we are both leaders in a running club called Stroller Warriors and lucky for me there are 48 chapters all over the world, including 3 on O’ahu! Before even arriving I had several wonderful ladies reach out to me to see what they could do to help. Traveling 4,000 miles away from home for surgery with two toddlers felt a little bit less daunting knowing I had a group of like-minded, supportive military moms to lean on if needed.

I had several pre-op appointments the week before my surgery and after dragging our kids through a full day of appointments, my husband and I decided it would be easiest if he dropped me off and spent the day with the kids back at the hotel instead of waiting at the hospital the day of my surgery. However, to make things a little tricky, we only have Japanese cell phone numbers (which actually work in Hawaii thanks to Sprint) and even though the hospital assured us they could call our number they proved several times that week that none of their staff actually knew the right number to dial. So I reached out to one of the awesome ladies from Stroller Warriors, Arlene. I just wanted to get her number so the hospital could call her and she could message Josh to come get me when it was all over. In my head, the surgery was going to go easy peasy and I was going to walk out as easily as I walked in.

Well, I was completely blown away when Arlene not only offered her phone number, but also told me she’d come sit with me at the hospital. I’d like to remind you right now that Arlene and I have never met. She is absolutely amazing for doing this! She showed up right after I’d changed into the super flattering hospital gown and no-skid socks. We instantly became good friends and every time a doctor or nurse came to talk to me they were shocked to learn my non-medical attendant/new best bud was a stranger to me 10 minutes prior. I cannot thank Arlene enough for not only keeping me company before surgery, but also for spending the entire day waiting for me to get out of surgery, talking to the doctor and relaying detailed messages back to my husband all day long. She even gave me a ride back to the hotel so my husband didn’t have to load the kids up to come get me. She is a saint!

I guess now is a good time to fill you in on why I had surgery and how I am doing. I was medically evacuated to Tripler Army Medical Center in Hawaii to see an ENT specialist and have a cholesteatoma surgically removed from behind my middle ear area. For reference, the cholesteatoma was found on a CT scan taken 10 months earlier. This is how long it took me to get proper medical care all because I am stationed overseas. Fast forward to my surgery, the amazing Dr. Chen was able to skillfully remove the non cancerous cholesteatoma, but unfortunately had to do an ossicular chain reconstruction, removing one of my three middle ear bones because the mass had caused deterioration from not being removed sooner. (See brief explanation below on how ears hear, thanks to Netflix’s Ask the Storybots Season 2, Episode 4, I am basically an Otolaryngologist as well.) I will have to have another surgery in 9 months to complete the reconstruction once I have recovered and we confirm the cholesteatoma is gone for good. So for now I have even more profound hearing loss than I had before surgery (-60 decibels, almost deafness) in my left hear, but have been reassured my hearing will be as good as new after my next surgery. When you see me, please talk loudly and forgive me if I miss what you are saying, I promise I am not ignoring you…or am I? 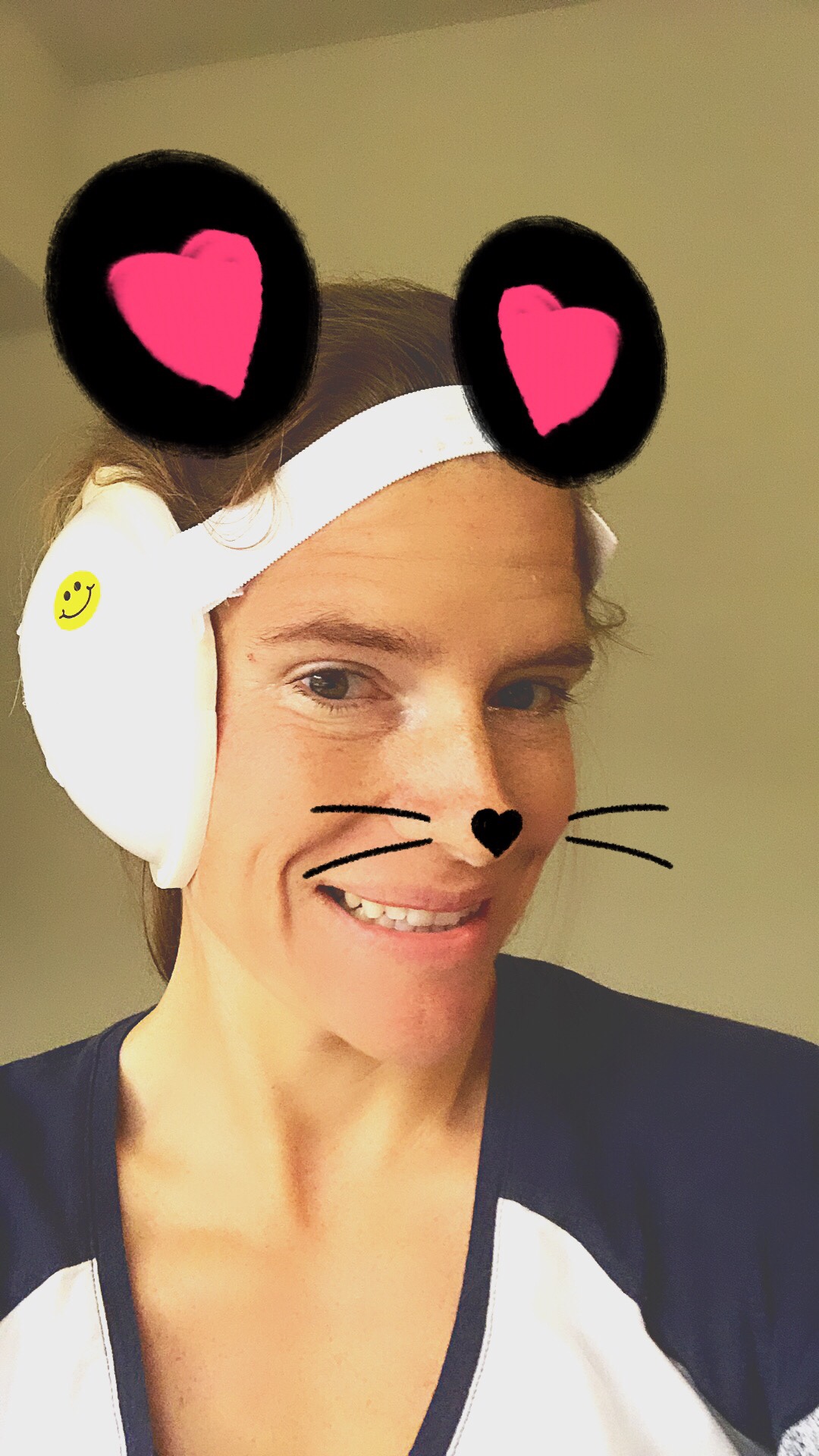 The three parts of the ear all help you hear. The outer ear funnels sound to the ear drum. This makes the eardrum vibrate. The three tiny bones in the middle ear (the malleus, incus, and stapes) pass the vibrations to the inner ear. There, the vibrations become electrical signals. These signals travel along the auditory (hearing) nerve to the brain.

Having your ear sliced open and your temporal bone drilled into is a little bit harder to recover from than I thought…I actually thought I’d be operated on through my ear canal and back to normal hearing and activities within a few days….because that is what I was originally told. Luckily I was given a “sick note” or extended stay in Hawaii for an extra 3 weeks. My family let me rest as much as two toddlers could, but in all seriousness we were itching to get out and explore so I popped the recommended dosage of Tylenol and we crammed as much as we could into our recovery/vacation.

I could not ask for a more beautiful place to be on sick leave. The weather was absolutely fantastic, it did not disappoint. We basically drove all over the island, went to a handful of beaches, did all the kid friendly activities, hiked several different trails and ate ALL THE FOOD. And I’m talking ALL of the food. I actually think I’ve gained 10 pounds from all of the American food I’ve stuffed into my body. I don’t even feel a little bit bad about it because it was so delicious and I won’t have any for a long time. 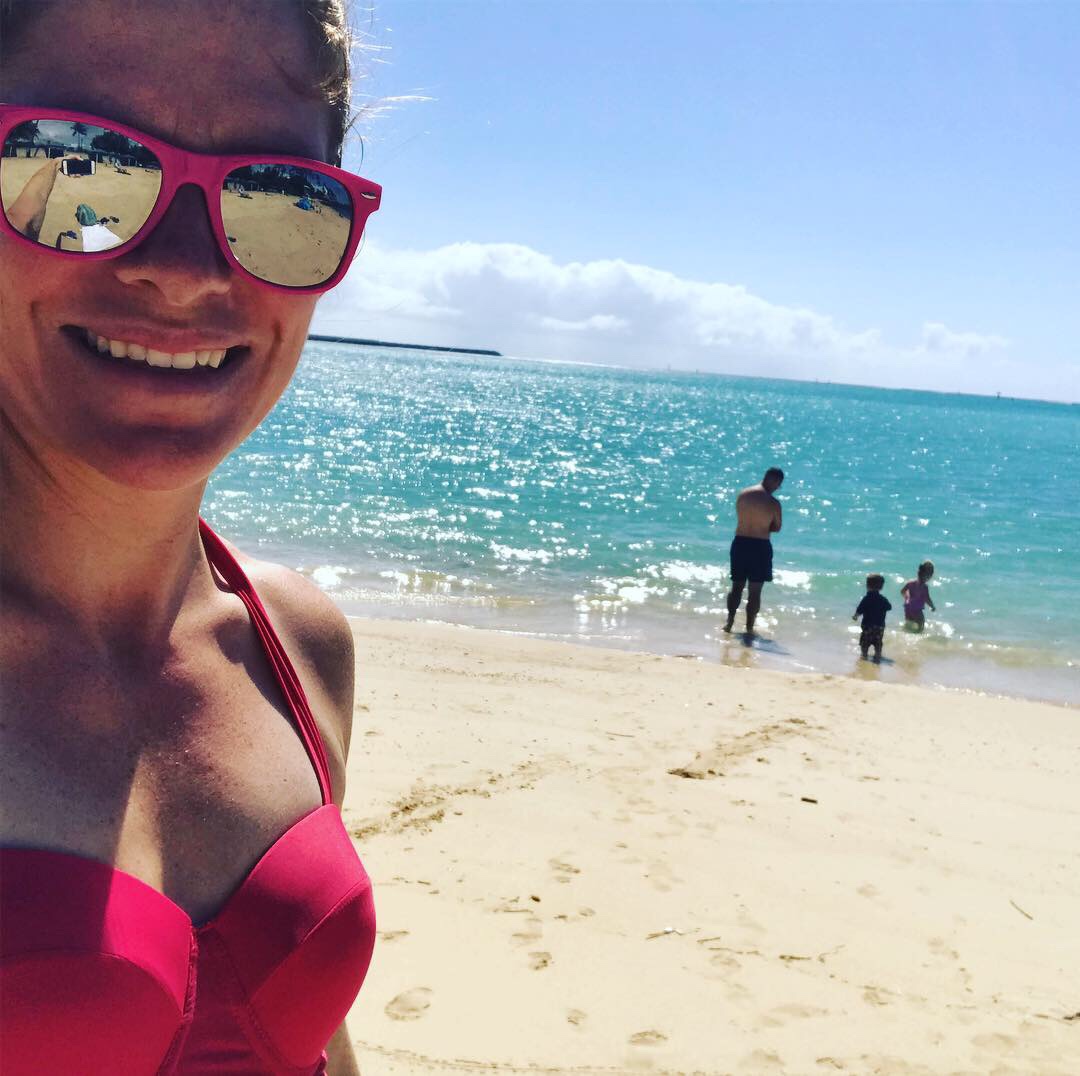 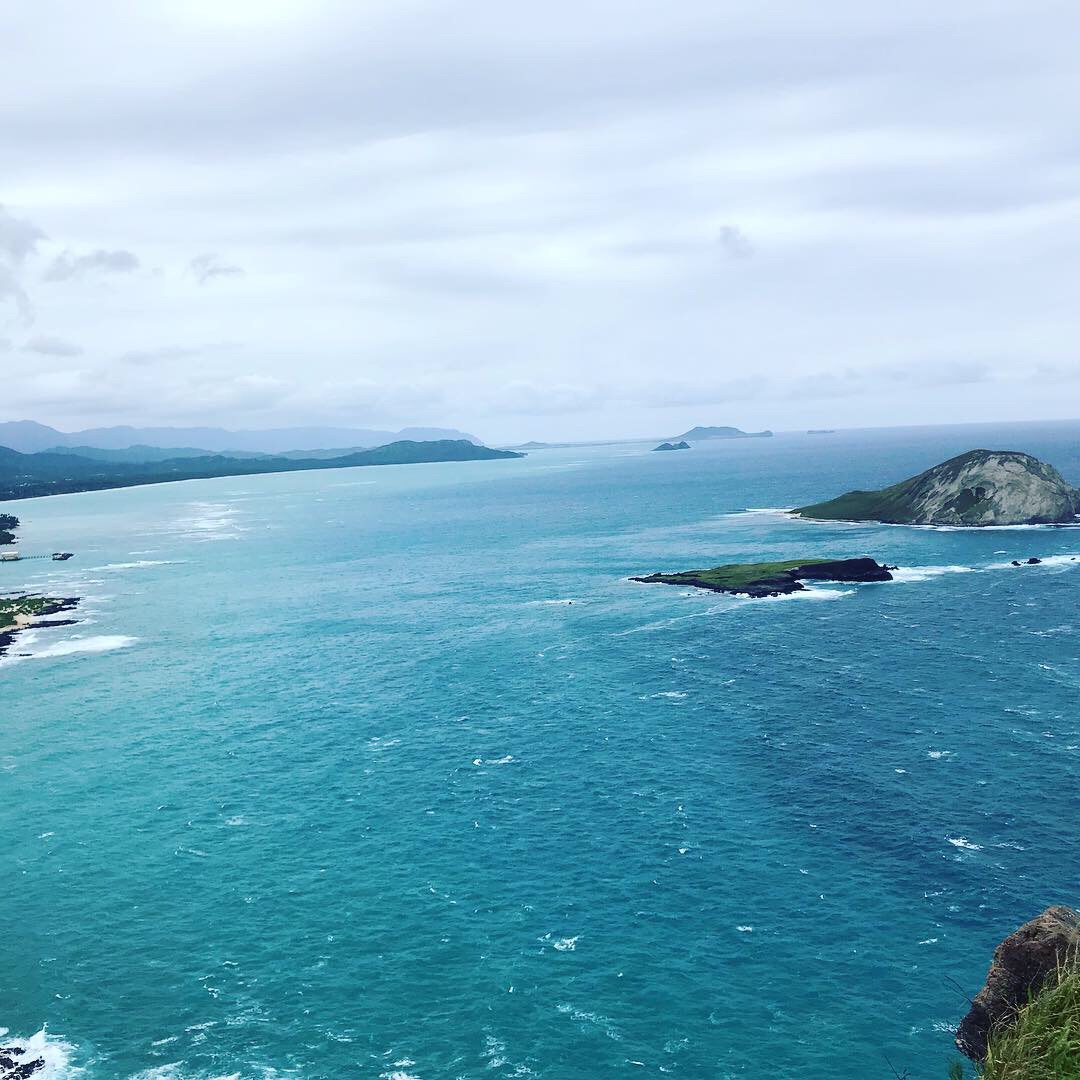 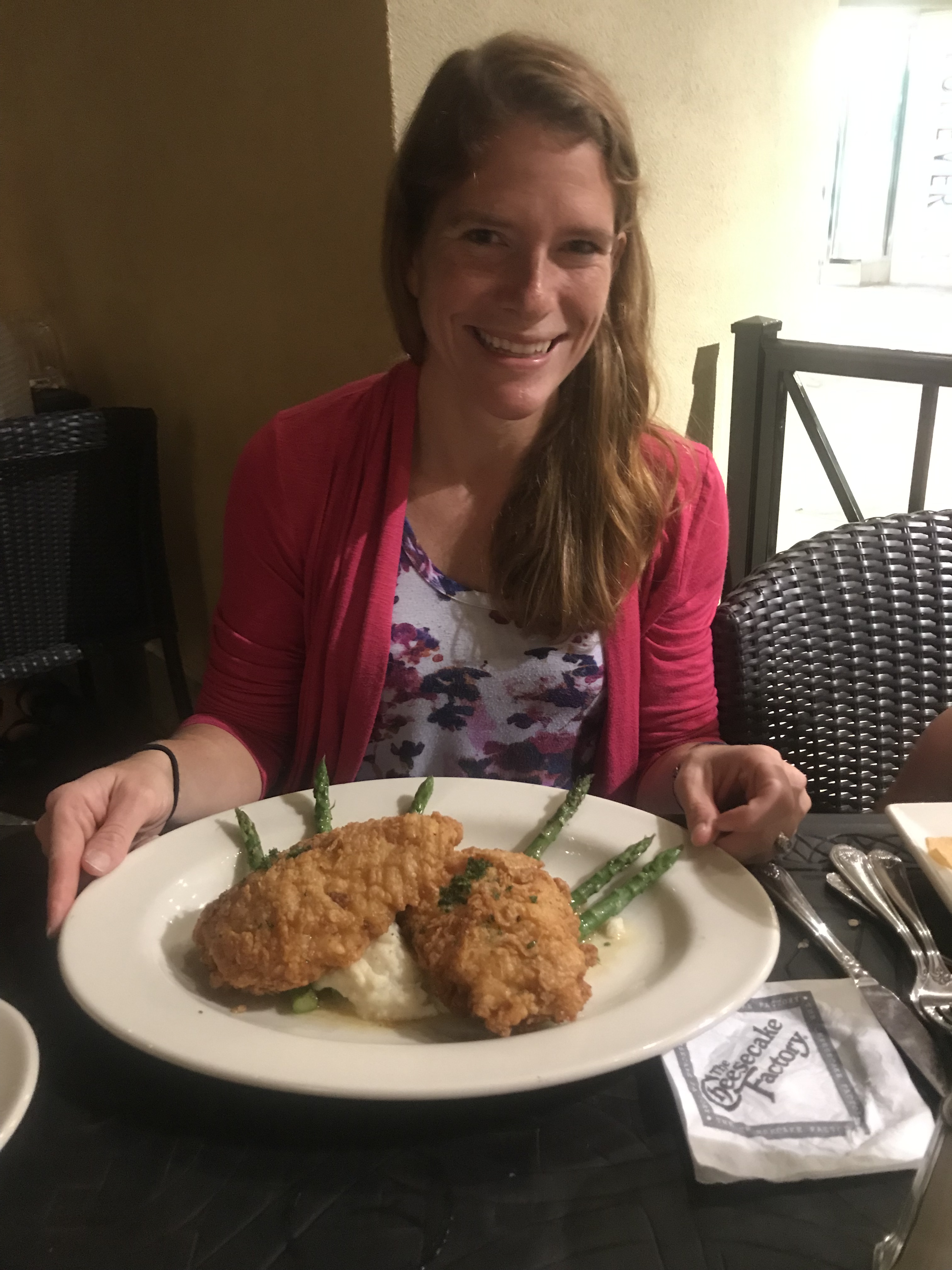 Coincidentally, one of my cousins was working in Hawaii while we were here and we were able to have lunch several times and catch up with him and his wife. They got to meet my son for the first time, something only a few of my family members have had the opportunity to do considering he was born in Japan. 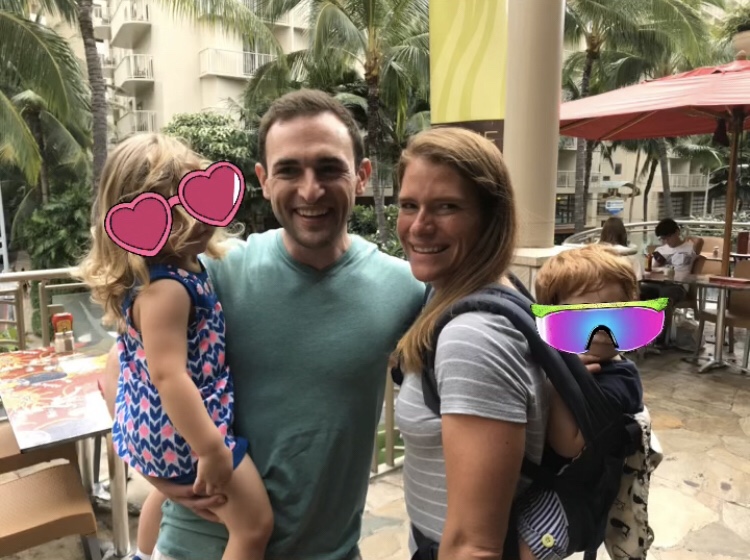 This trip was the best “family” vacation I have ever been on in terms of getting to spend quality time with family: blood family and ohana. In Hawaii an ohana, meaning family, is special. The people within it are bound together by genuine compassion, culture, support, loyalty, and love for each other. The experiences I had here were exactly that. I already told you about one of my new found sole sisters, Arlene, from my Stroller Warriors ohana, but I was also able to meet a few other amazing SW ladies as we spectated one weekend at the HURT100.

The feeling of ohana didn’t stop there. I also met another social media friend and fellow contributor for Military Moms Blog, Rachel. We connected over dinner and chatted through a beautiful sunset. 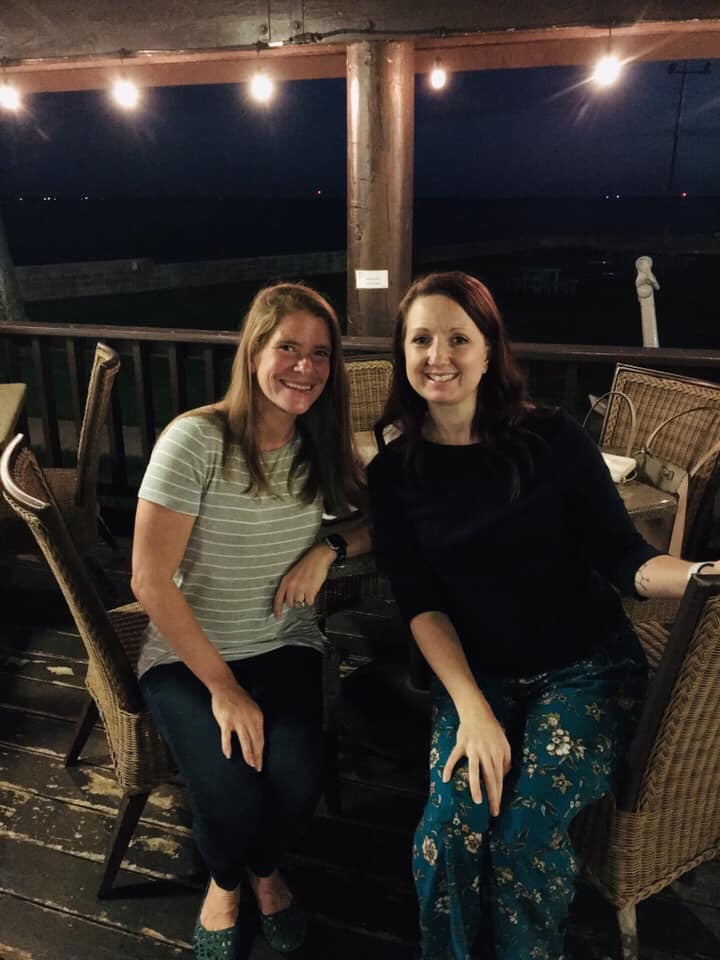 Once I was cleared to resume exercise I joined up with the local Saturday wear blue run group. There I met some loyal wear blue runners and enjoyed a meaningful run with them. (Embarrassingly I did not pack a single blue item, but I showed up anyways) 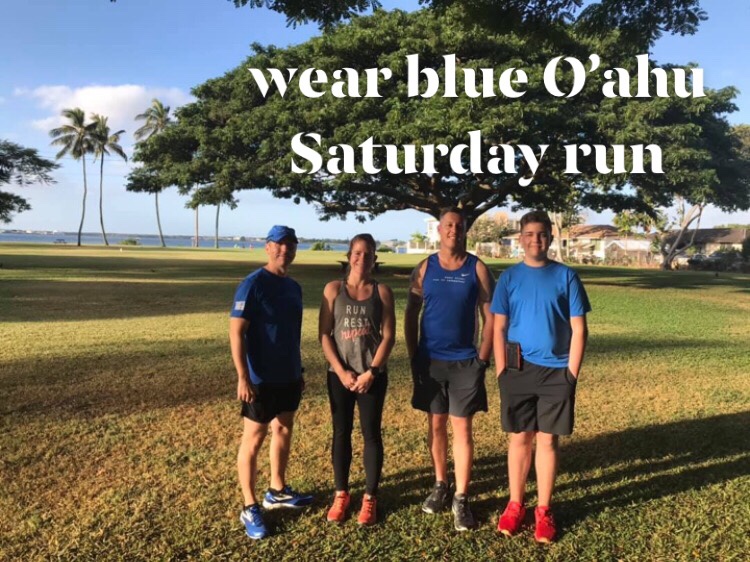 To become a part of someone’s ohana is a great honor and I am beyond honored to be a part of these groups. This military life can be rough sometimes, especially when you undergo something like a medical evacuation to the other side of the world, but the people you meet along the way who become a part of your family or ohana make this life worth doing. I’m feeling very lucky to have been in Hawaii and am already dreading the long flight back to Japan.

Stay tuned for my next post about traveling with two toddlers, one of which screams the entire time, and the wonderful things we did in O’ahu.

April 15th is National Husband Appreciation Day! You read that right! What are you doing to show your husband you appreciate him? Maybe cook him a nice dinner? Clean his house? Wash his clothes? Care for his children? Oh wait! You do that everyday? That’s exactly what I thought when I saw this, in fact, I thought it was an April Fool’s joke. What is this bullshit day and who thought it was necessary? I’m not even sure it is real because even Wikipedia didn’t have any info on it (and duh, they are all knowing).

Here are 3 reasons why we love our husbands on this day, as listed on http://www.nationaltoday.com (the website that created this dumb day):

1. He is our best friend for life – um ok, Claire is also my best friend, but you don’t see us married

2. Travel partner – this is debatable, my husband is worse than a toddler during airport security. He always seems confused about what needs to come out of his pockets and bags.

3. They take out the trash and other gross chores – well this just isn’t true! I can maybe get him to take out the trash once a month and now that we live in Japan where we have 4 separate trash cans for things he has completely stopped throwing stuff away because it is too confusing for him!

So yeah, these would not be my 3 reasons for appreciating him!

FULL RANKING OF WHAT WOMEN APPRECIATE MOST ABOUT THEIR HUSBANDS

Don’t get me wrong, these are all great reasons to appreciate him, but I still don’t see a reason to have a whole day dedicated to it. I mean, does he not realize I appreciate him when I get up at 5 AM with him to make his breakfast and pack his lunch? Or when I’m waiting up for him when he gets home from work and have a nice dinner ready?

When is wife appreciation day? Now that’s a day I can get behind!