I don’t even know how we began watching videos on YouTube that led us down the rabbit hole of inane children’s entertainment, but we found out pretty quickly that they range from absurd and pointless to educational and useful. Young kids seem to love it all though.

If you don’t know what I’m talking about, here are some basic characteristics of all the videos:

Starting with the most annoying premise for a video, allow me to break down, what I feel, are the basic categories for these weird-ass YouTube videos you may find your toddler hooked-on:

Movie/TV character animation nonsense – Basically an acid trip. These videos take characters like Spider-Man, Lightening McQueen, Minions, etc. multiply them and then just have them hop and move around the screen with nursery tunes playing in the background. Or worse – innocuous sound effects without music. There is simply no point to these videos.

Animated Sing-Song – My best example of this type of video are the 5 obnoxious singing babies. The videos are usually around an HOUR long. They sing about a gazillion songs, to the theme of “5 Little Monkeys,” But the lyrics don’t rhyme, the scenarios are bizarre, and the tune only varies slightly from song to song. To top it off, there seems to be some sort of language barrier. Other videos in this vein this have cartoon animals that sing nursery rhymes  (you’ll probably hear “Finger Family” for the umpteenth time in a single sitting). Head, meet Wall.

Live-action Toy Play  (innocuous) – These videos feature adults (and sometimes their kids) playing with kids toys. Sometimes there is a degree of creativity and technicality to the entertainment but, in my opinion, there is just always a level of creepiness to this that is unavoidable here.

Live-action Toy Unwrapping – This is usually where the surprise eggs play a major role and, like I said, are a huge hit with kids. The premise is simple: unwrap new toys and show how they work. It’s pointless and weird, but watching these live videos give us parents the distinct advantage of not having to buy toys ourselves. I especially like it when they choose not to narrate.

Animated Educational – The quality varies here. At worst, you have sloppy animated movie characters being painted different colors with bad editing and bad sound effects. At best, they pay better attention to editing and are more creative with original animation that shows examples of shapes, colors, numbers, etc. Sometimes there are even a continuous cast of characters that teach different things.

Live-action Toy Play (educational) – I can get on-board with these videos because they help kids learn colors, numbers, shapes, etc. My son was really into one with velcro vegetables. After enough views, he could identify all of those fruits and vegetables on his own and it entertained him so much my mom get him his own set for his birthday. It did not, however, encourage him to eat any vegetables. Other videos that have been a hit in our house feature neatly molded play-doh eggs for learning colors and revealing hidden toys. 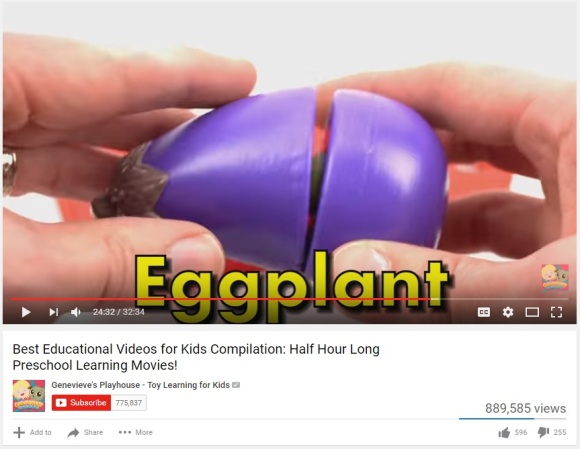 So, that basically sums up what I’ve generally seen lurking this weird pocket of YouTube, but they leave me with so many unanswered questions:

Despite the level of crazy I find to a lot of these videos, I think they’ve helped my son catch on to learning colors, numbers, etc. so quickly. What weird things does your toddler watch?