As a FTM I am constantly worried about messing up my kid. I am frequently reminded that I have no clue what I am doing. Should I have taken a test before they allowed me to leave the hospital with a baby?? Probably. I’m trying to follow all the rules. Use the ABCs of sleeping (Alone, on her Back, and in a Crib). Check. Exclusively breastfeed for the first 6 months. Check. When introducing solids at 6-months old start with vegetables first so baby doesn’t get hooked on sugar. Check. No screen time for the first two years. Errr, what?? How is that even possible?

For the first two weeks of DD‘s life I really embraced being a couch potato. Those were the good ole days, when she slept for 20 hours a day. As long as she was in my arms or on my chest I could literally be doing anything else and it would not bother her. I basically lived on the couch catching up on all my TV programs. Being a mom was a piece of cake. Then I read an article that said even having the TV on in the background was not good for the baby. OMG what am I going to do all day? Luckily a new, growing baby is a lot of work and left very little room for watching TV.

Nowadays, I try really hard not to turn the TV on in front of DD. She makes too much noise babbling and yelling at us or the screen to enjoy a show anyways. We wait until she is asleep before watching anything. Sometimes the 45 minutes DH and I watch TV before bed is our only alone time. It is a great opportunity to relax and reconnect.  BC we watched a lot of TV together. It was fun discovering a new show with him or re-watching an old favorite. We have spent a lot of money at Best Buy over the years filling our DVD cabinets with our beloved shows. We have even hosted TV show themed parties and movie marathons. Xfinity recently did a study that says TV is the glue to a stronger marriage. I definitely find this to be true, now more than ever. With a baby in the house, it is hard to find time to be a normal couple. 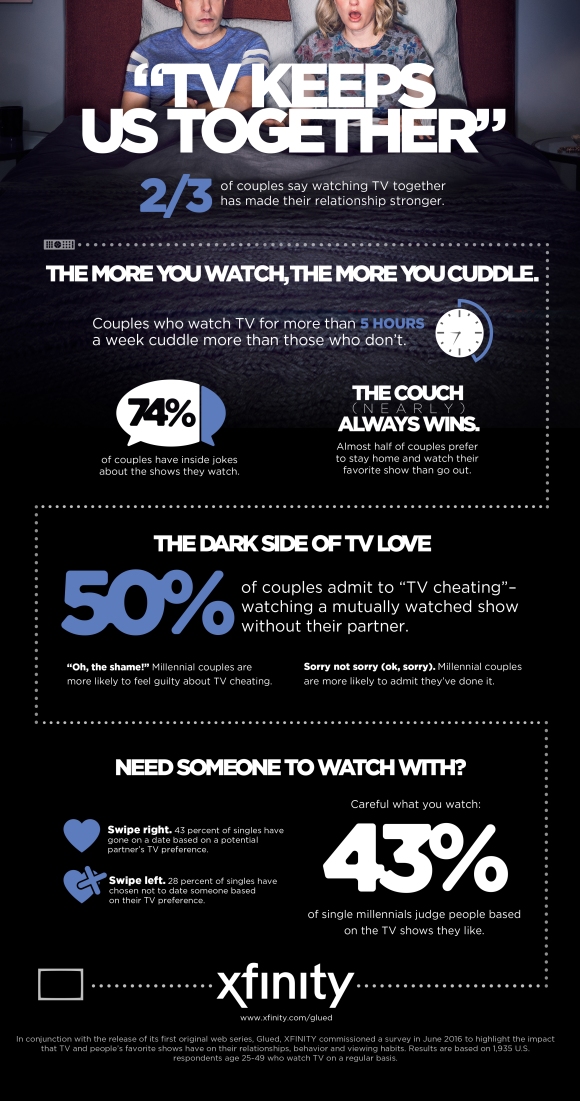 Anyone who has ever met my husband knows he does not like to cuddle. So I cherish the time we spend sitting next to each other on the couch sharing a blanket and watching TV. This is our “cuddle” time. TV brings us together and keeps us together. Just the other day we started watching a new show “Rick and Morty,” and DH asked how I like the show. I told him that I thought the show was OK, but what I absolutely love about it is how hard it makes him laugh. He said that made me sound like a serial killer. If liking something that makes someone I love genuinely happy makes me a serial killer then I guess I’m guilty as charged.

So you can see that TV is a big, important part of our lives. I’d like to be able to include our LO in this bonding time, but I seriously don’t want to cause her any developmental harm. I’m not saying I want her plopped in front of the TV, vegging out for hours during the day so I can have “mommy time”, but I’d like to not feel guilty if we have the TV on after lunch and a show captivates her attention for 10 minutes. There are plenty of other things I can feel guilty about as a mom; I don’t need TV to be one of them.

Being the Nervous Nelly that I am, I did a bunch of research on the topic at hand and found some interesting information. At first, I found that the American Academy of Pediatrics (AAP) specifically discourages any passive screen time for children under 2 years old, i.e., plopping kid in front of TV/using TV as a babysitter. “The concern for risk is that some kids who watch a lot of media actually have poor language skills, so there’s a deficit in their language development. We also have concerns about other developmental issues because they’re basically missing out on other developmentally appropriate activities,” says Dr. Ari Brown, the lead author on the American Academy of Pediatrics 2011 policy statement discouraging screen time for babies under 2.

Ummm, no thanks! The 10 minutes of peace and quiet I get while DD watches TV are not worth her missing the boat on language and other communication skills. Apparently just having the TV on in the background, is enough to delay language development. As parents we speak about 940 words per hour when a child is around, but when the TV is on that number drops to 770! Fewer words mean less learning. Yikes! It is not just the number of spoken words that are crucial to a child’s development, but also the exchange of facial expressions, tone of voice, and body language used during conversation. Whenever one party, child or parent, is watching TV, the exchange comes to a halt.

I totally get what the AAP is saying, but I have a hard time believing that parents are able to stick with this recommendation in this day and age. My LO FaceTimes with her Grandparents at least once a week, she loves sitting with her Daddy when he is playing computer games, and I am constantly using my iPhone in front of her to take our daily Tinybeans photos (if you are not sure what Tinybeans is, check out Claire’s post Keeping up with Tinybeans). Basically, we have already failed her as parents. I refuse to accept this fact so early in the game though. I am also super annoyed with the internet for showing the AAP’s 2011 statement first on all the search engines I am using. Have they not revised this in the past 5 years? FaceTime was barely a thing when this statement came out. Come on guys get with the program! Tell me I’m not making my kid dumb!

Bazinga! More recently (2015), the AAP is rethinking their original ban on screen time for children under 2. They are now suggesting it is OK in a controlled situation where the child is still interacting with a parent or a live person on screen. The AAP still doesn’t want kids watching hours of mindless television or YouTube videos, but “the latest neuroscience research shows that the more a digital experience approximates live two-way communication, the more a child younger than 2 will understand and process it,” Brown said. For instance, when a child is sitting and watching a TV program or a video on an iPhone, there’s not a great deal of activity in the brain. But when the child is watching someone they know or even someone they don’t know on a webcam during a video chat, “there’s a whole lot of brain activity going on,” Brown said. Boom! Winning! I feel a 1000 times better now, don’t you?

I am a little disappointed that I wont be sharing an episode of Game of Thrones with my LO anytime soon, but any and all guilt that I felt about letting her watch Baby Signing Time while I wash the dishes is completely gone. I may actually be helping her development with that show! It is currently the only show she watches. I think there is something about the other babies on the screen that intrigues her. I know there are a lot of other well-designed shows out there that teach kids literacy, math, science, problem-solving, and pro-social behavior. Children get more out of these interactive programs like Dora the Explorer and Sesame Street when they answer the characters’ questions. Go, Diego, Go, a spin-off from Dora the Explorer, is one of Claire’s son’s favorite shows. Hopefully she can rest easy tonight knowing that this show is not melting his brain, and conversely has been given several awards stating that it is an outstanding children’s program. Way to go Claire!

So basically TV can cause a lot of developmental harm to your child, but if you use common sense and set limits for screen time you will be doing alright as a parent. Babies’ brains are growing fast and are easily influenced by stimuli. Try to eliminate any and all non-interactive screen time for children under two years old. FaceTime, Skype, and other interactive TV shows are OK, but should be utilized with a parent. If you are unsure about a show your child is watching, check out Common Sense Media which helps families make smart media choices. Hopefully this information is useful for other moms out there and removes some of that “mom guilt” we all tend to put on ourselves.

One reply on “Screen Time for Babies: If this is wrong then I don’t want to be right”

[…] in July I wrote an article about screen time for babies and how it is a big “no-no” for children under 2 years of age. As much as I wish I were […]